Follow our instagram and facebook accounts to keep up to date with all our new fresh scents, get information on our giveaways, take advantage of our promos and for the list of all the retail stores stocking our products / markets we'll be coming to.

St. Andrew’s United Church consists of a T-shaped, wood frame building with pointed windows and a steeple capped with an octagonal peaked roof. It is located on Glover Road south of the Fort Langley Cemetery.

St. Andrew’s United Church (formerly St. Andrew’s Presbyterian Church) has historic, spiritual and aesthetic significance; in particular it is notable for its age, its association with religious pioneers as well as its lasting spiritual connection to the community, and for its Carpenter Gothic architectural style. Constructed in 1885, it was the first church to be built in Langley and the second Presbyterian church to be built on the mainland of British Columbia.

It was one of the last churches built while the Presbyterian Church was still overseen by the Church of Scotland, a situation which changed in 1887 when that power was given to Toronto.

Also significant is its proximity to the Fort Langley Cemetery, Langley’s first municipal cemetery, established in 1884, one year before the church was built. The two sites work together to establish an air of sanctity and to reinforce the landmark status of each other.

St. Andrew’s United Church is associated with Reverend Robert Jamieson, who was considered to be a pioneer of the Canadian Presbyterian Church in BC. He was the first minister to practice on BC’s mainland, and was the founder of St. Andrew’s Church. The community has shared memories of him travelling great distances on foot, by horseback and canoe to preach. Reverend Alexander Dunn, who came to Fort Langley in 1875, convinced the Church to provide funds for the building of St. Andrew’s and it was he who named the church.

Pioneer settlers with early connections to St. Andrew’s were James Mackie, Langley’s first Reeve (warden), who donated land for the building, Thomas Turnbull who built the church, and Henry Hoy of New Westminster who designed the structure. This is the only known building designed by him in the province. Pioneer Henry Wark funded the building of the spire and belfry in time for the opening and dedication of the church. The bell for the spire is valued by the community because of local lore that claims it came from the Hudson’s Bay Company Steamer ‘Beaver’ that used to ply the Fraser River in the 19th Century.

Aesthetically, St. Andrew’s Church is noteworthy for both its exterior and interior architectural design and for its siting in the community. Significant architectural elements of this Carpenter Gothic-style structure include its simple massing, its steeple and belfry with a trim railing and its typically west-coast wooden construction with a peaked roof and drop siding. It is unique for its windows which are tall and thin with triangular – rather than rounded – gothic peaks. Inside, the sanctuary is petite at only three bays long and is made tranquil by the subdued lighting from the stained glass windows. It still has its original pews, windows and floor material. The setting of St. Andrew’s Church has landmark status due to its location on a historically important road (Glover Road – formerly Trunk Road). 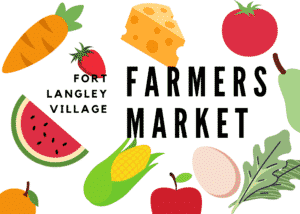